What Happens When You Let Go?

What Happens When You Let Go? 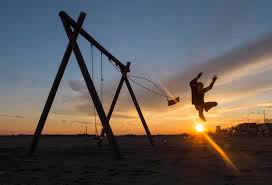 Why is it as we get older that we seem to have a harder time reaching for our goals? When you think about going back to school to earn a degree, do thoughts pop in your head about being too old or not being able to afford it? How about if you are trying to make a lifestyle change such as stopping smoking or getting in better shape? Does your mind start to get filled with thoughts that make these reasonable goals seem as impossible as flying to the moon?

So what is actually holding us back to the point that just the thought of reaching toward a goal fills us with anxiety and self-doubt? It’s just the fear of letting go. You might be telling yourself that it’s much more than that, but I want to assure you that no matter how dramatic and persuasive the fear might feel, it’s really nothing more than just being afraid to let go of the security of the status quo and take a risk into the unknown toward our goals. You might be asking if it’s so simple, then why do we have such a hard time with it?

Think back to when you were a child swinging on a swing, hands tightly clenching the chains that kept your seat attached to the top rail. Wasn’t it loads of fun and as you worked to make yourself go higher and higher? Of course it was fun. Just watch any child swinging and all you’ll see is joy.

But do you remember what was even more fun? I’ll bet you do now. It was when you reached the highest point of the swinging arc and then unclenched your hands from the chains and…

Remember the feeling of flying through the air? Was it scary? Maybe at first, but after you landed with a resounding thud on the ground, were you ready to do it again? I’ll bet you were. Interesting how when we were children that our heads did not get so filled with fear that we couldn’t let go of the chains and go flying into the unknown.

The experience of letting go is exhilarating because at the precise point when we let go of our attachment to whatever was making us feel secure, we are no longer in control as we have trusted that some other force outside ourselves will take over. All we really needed in order to let go was to have faith in something other than ourselves once we let go of the chains or jumped off the diving board or rode a bike without the training wheels.

If we could so effortlessly do this when we were children, then why is it so hard to do it now? Is it because the stakes are so much higher that the risk is too great? Maybe, but I don’t think so. I think it’s just that we forgot how much fun it actually is to let go and have faith that we would be okay once we launch ourselves into the unknown.

Want to go back to school or make a change in your life, but don’t know how? It’s really not that hard as you’ve already done it many times in the past. Just remember to keep pumping your legs as you swing higher and higher and then…

Let go of the chains.